It’s a new month, which means a new blog post from yours truly – this time focusing on the theme of Sportsmanship. So far, March has seen the England Men’s Cricket team going head to head with the West Indies and the England Women’s team against India; there’s been a lot of high-quality cricket to enjoy and some amazing moments of positive Sportsmanship to admire.

March also brought 2019’s International Women’s Day, which flooded the news & all our social media feeds with positive images of so many Girls’ endeavours and achievements. Brilliant to see and reassuring that there are so many options ahead for my daughter, but I couldn’t help feeling that in this day and age our sons also deserve the same credit and limelight. Having a son and daughter it is important to me that Little Wickets offers both Boys & Girls the same opportunities and life lessons to help equip them in their sporting and life journeys ahead.

One of the most important of these lessons is about positive ‘Sportsmanship’ and yes it is a ‘gendered’ word, but let’s be honest ‘Sportspersonship’ would just be ridiculous (& sends my spell checker into spasms).   Whatever the politically correct name is, at its heart ‘Sportsmanship’ is the ethos that a sport (or any activity) can and should be enjoyed for its own sake, whilst taking into consideration the wider elements of fairness, respect, and feeling a sense of fellowship with the people you’re playing with AND against. Positive ‘sportsmanship’ is a theme that runs through all Little Wickets activities and, I’m pleased to say, mirrors the professional demeanour of all the England Cricket teams that have been in action this month.

Having a cricket-obsessed son & daughter who wanted to watch every moment of the action that they could (until I sent them to bed), it’s been wonderful to see the England Women remaining respectful to their opposition even amongst their strong wins, with batter, Danielle Wyatt giving credit to India and saying of England’s win, “”It’s amazing to beat India, because it’s a tough place to play”. In a similar vein, during the Men’s One-day Test matches against the West Indies, it couldn’t have been easy to have the cricketing world scrutinise every mistake, but our boys kept their cool and stayed respectful ‘good sports’ the entire time. Then, when the Men’s Team started outperforming the West Indies in the ODI series, the England captain, Eoin Morgan stayed humble and gave credit to the bowlers, whilst being upfront about their earlier losses, “The bowlers were magnificent – taking early wickets put us on the front foot. It’s something we’ve not been able to do with the white ball on this tour”. 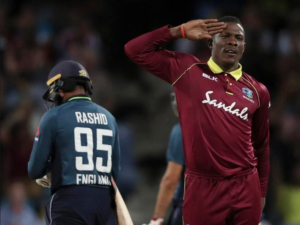 And then there was West Indies’ Cottrell’s trademark celebration – his military march & salute as he took wicket after wicket. It could have been seen as cocky and crossing over the good ‘sportsman’ line, but it turns out a bit of good-natured banter and fun doesn’t offend.  My kids loved it and will probably try to repeat it in their own junior games. I have pointed out that they need to take wickets for it to be relevant and there is a fine line between cocky and positive so reading the situation is essential, as is making sure they aren’t sending the wrong message to the rest of their team. Accepting defeat with grace and being a good loser as well as being humble when winning and congratulating all those involved is all part of a good game and being part of a good team.

Whilst we aren’t planning on introducing marching and saluting at Little Wickets, we will continue to keep positivity & good sportsmanship at the heart of all we do and all the while encouraging the kids to get involved and have fun. Teaching kids the underlying foundations of being a ‘good sport’ also translates to other, wider life skills that can be applied to different scenarios at school, at home, and in later life. The practice of being a good sport also makes kids realise that games aren’t all about them, and introduces the idea that they can be a good influence for someone else, which is a positive outcome in our book …  and may still be a work in progress for my kids, so I’ll be keeping an eye out for those victory salutes this season’s junior cricket starts … and we’ll be reviewing all the positive messages they learned as Little Wicketers not so many years ago…

If you’ve made it this far, thank you for reading, and if you would like to want to share your thoughts about sportsmanship or anything else, you can email info@littlewickets or send Little Wickets a message on social media (handle is @LittleWickets on everything!).

For Dates and details on our Holiday Clubs click here

For more information about Little Wickets in Schools & Day Nurseries

Wow just wow. 👏🏼👏🏼🏆Spare a thought for her parents who had to watch the drama unfold on TV, back in England. Behind every sporting success story are the taxi-driving parents!#only18 #grit #determination #hardwork ...

When this happens, it's usually because the owner only shared it with a small group of people or changed who can see it, or it's been deleted.
View on Facebook
· Share

This site makes use of cookies which may contain tracking information about visitors. By continuing to browse this site you agree to our use of cookies. Find out more.